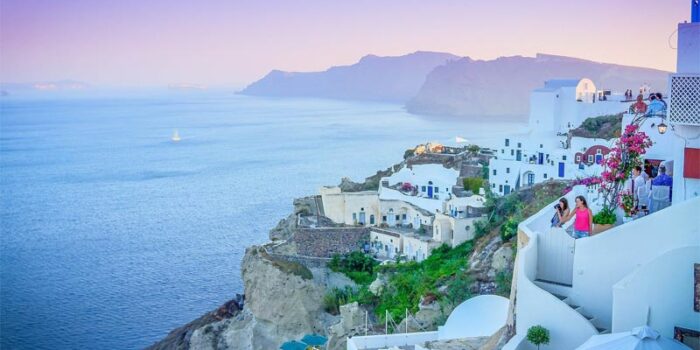 Greece is officially the Hellenic Republic and is located in Southeast Europe. According to the estimation of 2018, its population is approximately 10.7 million. It’s thought the first Ancient Greek civilizations had formed nearly 4,000 years ago by the mighty Mycenaeans of Crete. The Ancient Greek Empire spread from Greece through Europe and around 800 BC, they started to split their land into city-states, according to their laws, customs, and rulers. There are a lot many interesting facts about Greece which, will increase your knowledge about this oldest nation.

10: About one-third of the Ancient Greece people were slaves

Slaves have many types in different countries. Interesting facts that in history around, one third Greece people were slaves. Sparta, which was an ancient city of Greece has owned slaves called ‘Helots’. Their task was to grow crops and they had forced to give some of what they grew to the state. Athens was the oldest city of Greek too, but their treatment with slaves was different and slightly better. They welcomed them into family homes with a ceremony. They also do a job as a policeman, craftsman, and some even served in the navy. But sadly, no payment was given to the slaves.

09: They worshipped many gods and goddesses

Ancient Greece had many gods and goddesses and, they worshipped them for different things. They also constructed many temples and shrines where they worshipped. Aphrodite was the goddess of love and fertility, Apollo was the god of the sun and music, Athena was the goddess of war, and Zeus was the kind of all gods, etc. Interesting facts that in Greece it was believed that twelve different gods lived on Mount Olympus.

08: The yo-yo was invention of Ancient Greeks

Yo-yo is one of the oldest inventions of ancient Greeks. Now the same toy has been found which, is very similar and dates back to 500BC. Interesting facts that Greek’s oldest toy is a yo-yo.

Family life is considered very vital in Greece. Children mostly live with their parents, even after when they get married. May be due to their ancient civilization, because in most American and European countries, children left their parents in adult age. Interestingly, Greeks also live long lives and also thought that their variety of diets have comprised of olives, olive oil, mutton, seafood, squid, chickpeas, and lots of fruits and vegetables which, keep them healthy. Over 6000 years ago, olive trees had cultivated in Greece for over 6,000 years, and every village has its own. Now Greece is one of the biggest producers of olives in the world.

Creek abolished the monarchy in 1975 and developed a parliamentary republic. Under Greek’s new constitution, there is a president and a prime minister in a government. The prime minister has the most powerful than the president. Whereas, the president just selects the cabinet ministers who run the different governmental departments. Their parliament has a specific name which is called the Vouli. It has only one house with 300 members who are elected every four years. An interesting fact that Greece has become part of the European Union since 1981.

Greek also superstitious, when you will visit here, you will notice that jewelry and other ornaments have the shape of the big blue eye. That resembles the evil eye, and it is one of the most common superstitions. They thought that a jealous and angry person can cast a curse on you. So, as a result, you will come across different bad lucks in your life. Interesting facts that Greece thinks that wearing this blue eye jewel will ward away from the evil eyes of people.

04: Ikaria, the world’s blue zones where people have long lifespans

This is one of the interesting and strange facts about Greece, they think if they want a healthy and long life. So, they should live in Ikaria According to scientists, Ikaria is a “blue zone” where people have the longest lifespans in the world. There are a total of 5 blue zones in the world and, Ikaria is one of them.

03: Grandparents usually live with their children’s family until they die

Unlike other European countries, Greece children usually live with their families until they marry, and their grandparents also live with them in a family until they die. Interestingly, there are very few old homes in Greece, and generally, you keep with your family closely.

In prehistoric Greece, the wearing of red lipstick has some symbolic importance, which calls it a lady of the night. According to Greek law, any women who work outside and appeared in public without their designated lip paint and other makeup. They could be punished for inappropriately posing as non-working ladies.

Besides other interesting facts of Greece, it can be surprising for you that in ancient Greece, throwing an apple at somebody was a declaration of love. And this gesture uses commonly as a marriage proposal.