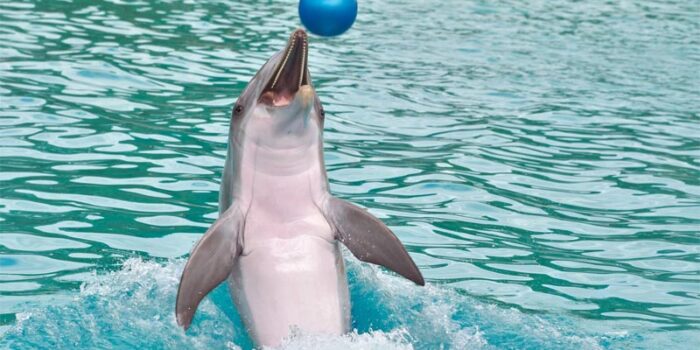 Dolphins are playful and friendly creatures that are well-loved by everyone. They are smart and intelligent and, we frequently watch them performing impressive tricks. Now 40 dolphin and porpoise classes are categorized into six families. Generally, they find in the size range from the 1.7-meter-long long and 50-kilogram. Mostly dolphin lives in the seas and oceans and as well as in some rivers too. But some dolphin species prefer to live in seaside areas, others like shallow water but prefer to live away from the shoreline close to patches of lighter water which are located further out to sea. Dolphins are mammalian and warm-blooded creatures that give birth offspring and also feed them with breast milk. There are many interesting facts about dolphins which you should know about this friendly creature.

10: Diet and Behavior of dolphins

Dolphins are predatory creatures. They use their strong jaws to grasp their prey, but then either they swallow their prey whole or tear it into small pieces. In the sea world they are comparatively light eaters than other small creatures; the bottlenose dolphin, for example, eats around 5 percent of its weight each day.

Many of the dolphin species migrate to explore food. They consume a huge assortment of different animals like fish, squid, crayfish, shrimp, and octopus. Many dolphin species work in a group. They may also follow fishing vessels to enjoy the “waste” which are thrown overboard. Dolphins are mammals, that’s why they have to come to the surface of the water for breathing. They are different from land mammals that breathe and eat through their mouths, but the dolphin has separate holes for performing each task. They eat through their mouths and breathe through their extra blowholes. This prevents the dolphin from sucking up water into the lungs during hunting and also it reduces the risk of drowning.

Besides friendly creatures and the interesting facts about dolphins that some dolphins even understand many words. Like they can understand 60 words, which can make up 2,000 sentences. As well dolphins show different signs of self-awareness. They are extremely intelligent animals who also display culture, something which was long-believed to be unique to human beings.

One of the interesting facts about dolphins that they have numerous highly developed forms of communication. Even they use a “signature whistle” which lets other individuals recognize them easily.

Like many mammalian creatures’ dolphins have also a long span of life. But different dolphin species live according to its environment anyhow the average age is between 15-20 years. Interesting facts that some dolphins’ species like the bottlenose dolphin can live up to 40 years of age. It is comparable to a human living to be 100 years of age.

Dolphins are altruistic animals and are highly social creatures. They are even famous for helping those who stay and help injured individuals. They even help them on the surface to breathe. There are many examples in which dolphins helped humans and even whales in a difficult time. They are unbelievably social animals. They spend life in groups and cooperate to get food and raise their offspring.

Dolphins are sea creatures and, the interesting facts about them that they don’t drink water like other mammals. The main diet of dolphins has a good amount of water and so dolphins fulfill the water requirements from their food. In other words, they don’t need to take a lot of fluidity food as they don’t lose water by sweating like humans.

4: Young dolphins learn from their mothers

Like other creature’s young dolphins learn many things from their mothers. You know dolphin calves stay with their mother at the age of 3 to 8 years. During nourishment and development, the young dolphin needs to learn three important lessons to learn like hunting, socializing in the pod, and to defend itself from other dolphins.

03: Dolphins have teeth, but they don’t chew their food

One of the interesting facts that dolphins have around 72 to 104 teeth. During lifetime they just get one set of teeth. But besides, have plenty of teeth, they don’t chew their food. They only use their teeth to catch food and, then they swallow it straightly.

Many habits of dolphins are similar to human beings. Interesting facts about male dolphins that they attract a female dolphin by bringing gifts for her, performing aquatic maneuvers, and may sing to his loved one. However, if there are numerous suitors, male dolphins will fight to determine who wins the right to mate with the female dolphin. They take just 10 seconds in mating and, they can repeat it several times in a day.

01: Dolphins don’t interrupt each other while communicating

One of the interesting and fascinating facts about dolphins, that they also show manners like human beings. They don’t interrupt each other while communicating. A scientist recorded the two black bottlenose dolphins which were exchanging sounds in a way that resembled a conversation between two people. While interacting with each other these dolphins took turns producing sounds and did not interrupt each other. Many scientists believe that they were speaking in sentences many others called their bluff.