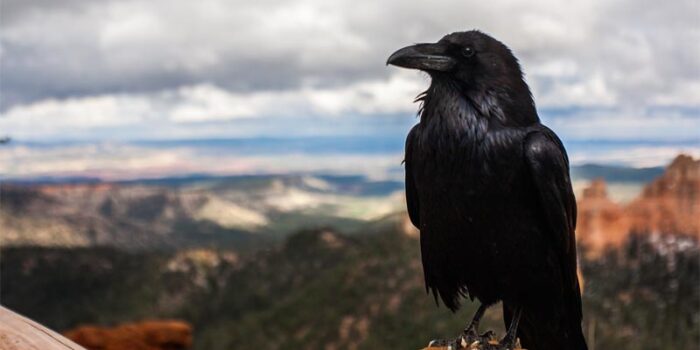 Crows are black shiny and, intelligent birds they adopt things easier than other birds. They make a loud and harsh noise like “caw.” They belong to the species Corvus in the family Corvidae. Many people linked many superstitious with this shining bird. But this bird deserves respect and admiration. Crows exist all over the world, the American crow lives all over North America and prefers open areas. You can find them in agricultural land and grasslands. They find in northern Europe, throughout Asia, and almost all around the world. There are many interesting facts about crows you don’t know about this bird.

Crows are omnivores, like human beings which, means they eat almost anything. They prefer to eat small animals such as mammals, amphibians, reptiles, eggs, and carrion. They also eat insects, seeds, grains, nuts, berries, vegetables, worms, and even other birds too. Interesting facts that crows have also been observed eating garbage and, they steal and snatch food.

09: when a crow dies, its fellow bird through its funeral

A dead crow tends to attract a crowd of a hundred or more live ones. It has observed that the live crows rarely touch the dead one. Why do they do this? Some studies recommend that the mass crowd is part of a survival strategy: The birds are learning about threats and seem hesitant to revisit any spot where they’ve come across a dead crow, even if food is plentiful there.

You have heard that most birds have a small brain but, it is contrary to crows because their brains are large in proportion to their bodies. One of the interesting facts that the weight ratio of crows’ brains to their body can be compared to those of dolphins and great apes. Despite their small size, they have big brains respectively, which give them a definite advantage in intelligence. Due to their brain size, they have a sharp memory, they can remember faces for up to half a decade. They can also recall specific colors of food containers for around a year.

One of the interesting facts about crows that they can recognize human faces easily. So, you should careful before treating badly to them. They have acknowledged identifying humans associated with stressful situations, such as keeping them imprisoned or killing one of their fellow crows. Once you made a bad impression on them, the crow will remember your face up to five years.

06: A crow save their food for later use

As intelligent creature crows don’t just leave extra food lying around. When they find food in abundance, they store them in caches for later consumption. Smart birds also bury food in different spots or hide them in leaves. When they feel hungry, they go back to their caching spots and retrieve the food. Frequently, they store food at the top of their hiding spots so they can remember where they put the food.

Crows are smart birds and, they are highly social too. They often remain together in tight-knit families. One of the interesting and fascinating facts about crows that a couple of crows will typically stay together until one of them dies. Both the male and female help each other in building nests and raising chicks. But, when it comes to mating, crows can be quite promiscuous. Sometimes they mate with other crows outside their pairing.

Crows are stealers and snatchers also. Interesting facts about the group of crows can also work together to get food. Scientists have made documents about crows that how they pull on the tails of predators to distract them, allowing other crows to snatch their food items.

Normally crows find in black color but, white crows also exist. Have you ever seen a white crow? It is rare because they only find due to some genetic abnormalities. An albino crow hereditarily lacks the pigments responsible for the color of its feathers. Due to this abnormality white crow has red or pink eyes and legs. It frequently just survives till a young age because albinism comes with visual issues.

01: Young crows can help their parents raise their other chicks

One of the interesting facts about crows that they help their parents also while raising their fellow chicks. After a few years, young crows leave the nest and venture on their own. Sometimes they protect their baby crow siblings from predators. They have observed while helping and feeding the siblings chicks.