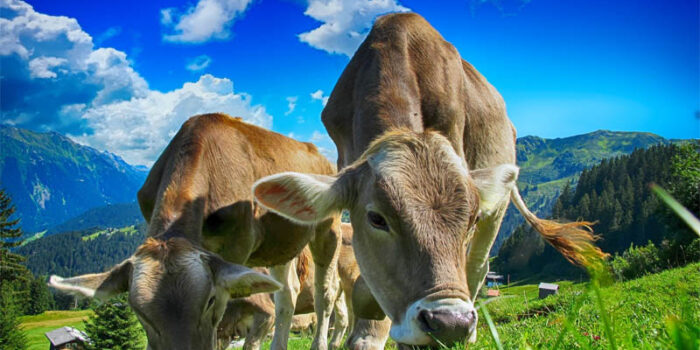 A cow is a mammalian creature and consists of ruminant herbivores. It is one of the most commonly trained and domestic animals in the world. Did you know that cows are female? Yes! It’s true! Because bulls and steer are male species. She is only called a cow after giving birth to a calf. Before giving birth, she is just known as a heifer. These classes refer to cattle. You know there are around 1,000 different breeds of cattle in this world. There are many interesting facts about the cow, I am sure you didn’t know about this domesticated creature.

Cows are herbivores that’s why they love to live in grasslands. They roam in the grassland grazing on the grass. But wild cows live in forests where they don’t find grasslands. Forests are not a particular place for cows as they can destroy forest areas by eating shrubs and plants making it difficult for new trees to grow.

One of the interesting facts about a cow that they have a complicated digestive system. Mean their stomach has four compartments, instead of one. Every stomach compartment has a different role and plays an important part in the cow’s digestive process. The four compartments are the rumen, the reticulum, the omasum, and the abomasum, while humans just have a monogastric stomach with one chamber. Its digestive system lets herbivores to graze and consume grass until they are full. The un digestive grass goes into the compartments of the rumen and the reticulum.

Yes! It is one of the bizarre facts about a cow that cows are also killer. Besides living with human beings for many centuries, in aggression, they can kill human beings. According to the ABC News report, which was published in Wilderness and Environmental Medicine. It tells that cattle cause an average of 22 deaths per year. But on the other hand, sharks kill around six people per year.

One of the interesting facts about a cow that humans and cows have around 80% similar genes. Researchers from the National Institutes of Health and the US Department of Agriculture recorded the bovine genome. They discovered that every cow has around 22,000 genes, and 80% had matched with the human body. You know we’re closer to our cattle than we think.

07: Give a cow name, they will give you more milk

Sometimes we close too much with our pets and give them names. Maybe you have seemed that if farmers have a good relationship with their cows, they give them names and show enough affection. One of the interesting facts about a cow that it can produce more milk than their lonely counterparts. According to the 2009 study from Newcastle University found that cows who are more comfortable around humans, they become less stressed when giving milk. During stress, cows produce cortisol, a hormone that constrains milk production. Furthermore, one of the plus points of this human cow relationship, in this way farmers are less likely to get injured during his job.

Cows also show emotions like human beings. They are emotional creatures. During stress, it gets annoyed and shows real emotion. Cows tend to system close friendships with around 2-4 other cattle in their group. They are known to be aggressive towards humans if they disturb their group in some way.

05: A Cow’s Sense of Smell Is Superior to Other Animals

One of the interesting facts that a cow has an unrivaled sense of smell. It cancan detect odors up to 5 miles away from wherever they are. This superior sense makes them highly capable of sensing danger or attack, especially when coupled with their superior vision and hearing. Naturally, we don’t think of cows as being so highly developed, but this is a very sensory creature.

Like many other animals’ cows cannot see different colors they are color blind. Interesting facts about Cow and bull is that they are mostly red/green color blind. Though, it doesn’t make much sense with regards to cattle as they can’t discriminate between red and green.

03: Cows Can Walk Up Stairs, but not Down them

This fact is really strange in interesting facts about the cow. Interestingly, a cow can walk upstairs, but it wouldn’t be able to walk back down again afterward. It is because the joints in their knees don’t bend the right way, so wouldn’t let them.

Besides, you know your Cow can remember and distinguish the people who serve them. It can distinguish externally, through smell and voice, the color of clothes, so barn staff usually wear clothes of the same colors. Many animals can find their way home back without the help of a shepherd. The most famous example is the cat, it remembers the ways thoroughly. So, you should think before hurting any cow. Because she remembers the offender, can experience antipathy, and reduces the amount of milk with such a worker.

Indians believe that the cow is a sacred creature. In fact, in many regions of India, slaughtering a cow is a criminal act and entirely prohibited. Once Mahatma Gandhi said about the cow: “I worship the cow and I shall defend its worship against the whole world”.