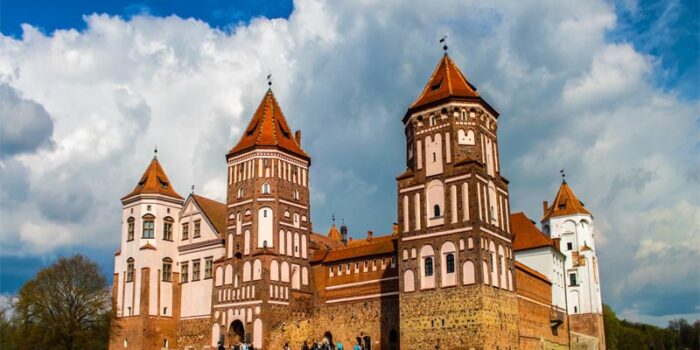 Belarus is a landlocked state in Europe. It shares borders with Russia, Ukraine, Poland, Lithuania, and Latvia in different directions. It located in the heart of Europe that right beside is the Baltic Sea and the Black Sea. Belarus means “White Russia” and derived by local Slavic people used to wear white clothes. Many people assume it is a part of Russia perhaps due to its name contains the “Rus” component. It is a beautiful state and, also has a connection with Russia due to the neighboring country.

Belarus and Russia are as Ying and Yang of Slavic nations. Russia is the great brother, grand, sturdy, and sometimes very exciting like Slavic spirit. While it’s western brother Belarus is different from Slavic characters such as peaceful, clean, nonviolent, and in a state of perpetual serenity.

Belarus has a total mass of area 207,600 square kilometers. Almost its 40% area has covered with forest. Minsk is the capital and most populated city of Belarus. It has a presidential republic government. President is elected for five years under the constitution of 1994. It has about 31 banks from 30 of them are working under government but only one is privately working. Belarusian Ruble is the currency of this state. It is the only state in Europe where the death penalty is still legitimate.

Belarusians enjoy food that has cooked or simmered slowly. They eat lots of vegetables, meat including pork and bread. They eat very little at breakfast but, they do special arrangements for dinner. There are a lot of interesting and fun facts about Belarus.

It is a common fact every nation proud to use its language but, you know there is a difference in the case of Belarusian. Census evaluations show that local people of Belarusians use to speak their native language but Belarusian deny this fact. Local people rarely use their language. Interesting and fun facts about Belarus, there are two official languages, that spoken here: Belarusian and Russian.

Belarus was once part of the Russian empire for a long time and then it was part of the Soviet Union. Therefore it has been under Russian influence for a long time and, though Belarus got independence after the Soviet Union dissolved, that’s why the population still speaking Russian. Because they were using this language in the past. Though, local people tell that they don’t speak the regular language spoken in Russia. They speak another language “trasianka”, a mixture of Russian and Belarusian.

Belarus is a flat territory. There is just one highest mountain that is called Dzerzhinsky, it is just 345m high above the sea level. But interesting facts that Belarus has 20 thousand rivers, in which the largest river are the Dnieper, the Zahodnjaja Dvina, and the Neman.

Belarus is a state of literate and intelligent people. Many intelligent and popular people born here. You know the literacy rate here is 99%, which is even higher than in the U.S. Amazingly, Belarus was the first state where the first book published in 1517. It was “Psalter”, Francysk Skaryna printed it. Interesting and fun facts that he was the first publisher of Belarus, who took this initiative and also, he was a famous historical figure. Svetlana Alexievich won the Nobel prize was also a Belarusian writer.

Every state tourism industry is associated with the idea of people traveling to other destinations either domestically or internationally for any purpose. Closely, it links with several industries like transport, hotel for keeping his tourist happy. But you know the Belarus tourist industry is promoting medical tourism as well. Annually, almost 200,000 foreigners come here for treatment.

The up-to-date medicine in Belarus is a mixture of the latest technologies plus some ancient folk traditions. At the same time, interesting facts about that the income of a regular doctor in Belarus is $200-$300 dollars, parallel to that of a plumber or a car mechanic here. Belarus has a free medical system for its citizens. Any citizen can go to any physician and get the essential treatment free of charge.

The fundamentals of the emblem comprise a ribbon in different colors of the national flag, a map of Belarus, wheatears, and a red star. At the base of the ribbon, the republic’s official name wrote in the Belarusian language. The emblem is a reference to the one that used by the Byelorussian SSR, designed in 1950. In the Soviet version, a hammer and sickle substituted the map of Belarus and the ribbon was all became red. On the left and right ribbons, the Soviet motto Workers of the world, unite! appeared in the Belarusian and Russian languages.

Superstitions are a part of many cultures and nations. In this regard, Belarusian culture is no exception from it. Most superstitions are now apparently no longer relevant. Yet people follow them like sacred orders. For example, almost every child is careful never make whistle inside the house it means that whistle will blow all your money away.

Another one doesn’t ever pass things over a threshold it means you will trap in immediate trouble. One of the interesting superstitious facts for the unmarried ladies in Belarus, don’t sit at the corner of a table, or you won’t be able to get married for at least the next 7 years.

04: Belarus is the land of potatoes

Although there was a time that Ireland was dependent on potatoes and recognized as a land of potatoes. Belarus is the state where you’ll explore the higher number of potato recipes in the world, interesting and fun facts about Belarus.

Since the 19th century, potatoes are considered to be at the very essence of Belarusian cuisine, around 300 dishes are containing potatoes in their recipes. On top of that, Belarusians are the nation who eat most potatoes all over the whole world, almost 500 grams per head each day.

Belarus is near to Russia, for a long time and has become a battleground for many wars. It seems, that Belarus has hidden treasure. Because famous personalities like Napoleon and the Radzivil family must have buried some of their treasures in Belarusian soil. The interesting and fun facts, from over the past 2 centuries thousands of treasures have been found in Belarus.

In the past, many people went there for sake of hunting treasures here but they returned unsuccessfully. It is a common belief that Napoleon’s container of gold is still hidden here in this attractive country but no one has any idea where it might be.

One of the interesting facts about Belarus that it has an extremely low unemployment rate. You know just 1% of beggars you can see there and homeless people are also few here. That’s why the crime rate is also low there.

Geographically, Belarus is a flat land due to a large amount of glacial scouring on the land. This destruction causes by glacial action are also responsible for the elevated different lakes and rivers that are found in the Belarusian territory. However, tourists who are visiting in Belarus will amaze to find mountain-like elevations on land that technically suppose to be flat.

Mining industries are responsible for these so-called man-made mountains in the European country. The elevations that are visible in Belarus aren’t natural, they’re spoil tips. Spoil tips are enormous piles created by the accumulation of waste material, that removed during the mining process. You know visiting or climbing these man-made mountains is strictly illegal. Though, these are interesting and fun Belarus facts.