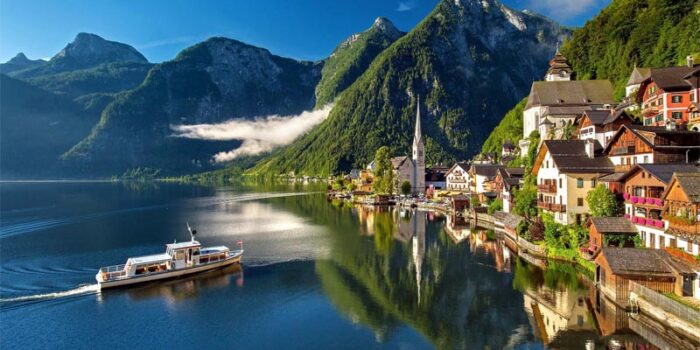 Austria is a landlocked east Alpine state in central Europe. It shares borders with beautiful courtiers like Germany, Czech Republic, Slovakia, Hungary, Slovenia, Italy, Switzerland, and Liechtenstein. It has a total mass of area 83,879 km2 and nearly 9 million populations.

Its capital city is Vienna, beautiful and wonderful. If you love to visit palaces, so in Austria “Vienna” is an amazing place to be. It has covered with the world’s most beautiful castles that will make you fascinated while your journey in this city. Palaces including the Hofburg, Schonbrunn, and Belvedere will surely amaze you and you want to stay in Austria always.

The people of Austria use German as an official language but, many Austrians converse informally in a variety of Bavarian dialects. You know Austria consists of those states that achieved around 19 Nobel Prizes up till now and stand right behind Switzerland, Luxembourg, and Scandinavian countries.

Austria is not Australia. They spell or sound almost the same, however, they are two different states. People sometimes confuse by their names, many jokes also made about this confusion. Australia is the 6th largest state on the planet but Austria is comparatively smaller than it. The country is famous for its hilly regions, especially the famous Alps. Unlike Australia which is a comparatively dry place comprises upon deserts. There are a lot of interesting and amazing facts about Austria, perhaps you don’t know.

You know the snow globe which you see in the market and look fantastic was invented in Vienna, the capital and largest city of Austria. In 1900, Erwin Perzy, who was an excellent instrument mechanic, was trying to improve the brightness of light bulbs for a surgical lamp. But instead of it, he accidentally invented a snow globe. After its successful first snow globe, he opened a shop in Vienna. More than 100 years later, they are still creating traditional snow globes now in Vienna, all hand-painted and manually assembled. It is one of the interesting and amazing facts that, these beautiful snow globes’ history is interlinked with Austria.

Waterfalls are unique natural wonders which look stunning and refreshing for eyes. It counts in amazing and interesting facts about Austria that the world’s highest waterfalls are present here. Krimml waterfalls consider as the highest falls in all over the world. It has a total height of around 380m. It is based on tiered a waterfall, that has three stages upper, middle, and lowest. The upper stage comprises 100m, middle 140m, and lowest stage is also 140m.

Interestingly, you have seen a book museum, antique things museum but you know the facts of Austria has an interesting and amazing museum that has almost 1000 clocks. Particularly, the center of attraction of the museum is the astronomical clock built-in 1679. The museum presents different models of clocks from several periods of history from all over the world, as well as from Vienna itself. One of the heaviest clocks on display is the clock mechanism that was initially installed in the city’s Stephansdom Cathedral in 1699, which has weighs, almost a ton. On the other hand, the museum has also the smallest clock that fits under a thimble! There are many timepieces present here ornately decorated pocket watches and cuckoo clocks to sundials and hourglasses.

07: Oldest national flags in the world

A national flag represents and symbolizes any nation in the world. It is flown by the specific government of the nation, or it can be a representation of any nation. A national flag is typically designed with specific colors and symbols, which separates it from the other nations of the world. Austria was the first country that has the oldest flags all over the world. It counts in one of the interesting and amazing facts about Austria. Its flag is formed with three great horizontal stripes of equal proportional lines. The top and bottom stripes are red, while the middle strip is in white.

The climate of Austria is generally continental due to the Eastern edge of the country that stretches as the Pannonian climate zone. It is typical for Central Europe with cold winters and hot and sunny summers. The Eisriesenwelt is a natural limestone and ice cave that is present in Werfen, Austria. The ice cave counts in interesting and amazing wonders of Austria. It is the largest ice cave in the world that expands more than 42 km. Almost 200,000 tourists come here every year. This cave had formed by the erosive action of the Salzach River. Snow melting from the glaciers around the cave drained into it and froze in the winter, as the result of ice formations.

Austria is renowned in culture and music traditions. This state has many famous composers and musicians that affected European music. Interesting and amazing facts of Austria called the “Land of Music”. It has many popular festivals that inspire the interpretation and understanding of music. During the 18-19 centuries, Vienna was famous as the European capital of classical music and hub of musical advancement. Legendary musicians like Mozart, Beethoven, Joseph Haydn, Johann Strauss II, and others are all associated with the capital city of Austria. Since the release of the movie Salzburg became a top tourist place. From that, even today the thousands of “The Sound of Music” fans continue to visit the filming destinations in Austria.

Now nuclear warfare has become the main concern of the whole world. Every nation wants to become a nucleated country and acquiring a unique and powerful nuclear weapon for the protection of its state. Where you know one of the richest and powerful countries has no nuclear power. It is one of the interesting and strange facts of Austria that consists of the anti-nuclear country. This state has no nuclear station and the latest weapons even it is opposed to nuclear power and doesn’t support its development.

03: Richest state of the world

You know besides its interesting and amazing facts, Austria has the highest standards of living in the world. Its capital Vienna is considered one of the most inhabitable metropolitans in the world. Austria’s GDP per capita was around $47,700 in 2016. It adopted the Euro on 1st January 1999. Euro banknotes and coins were introduced here in 2002.

Austria has another one of the interesting facts that its zoo has attained the reward of the world’s oldest surviving zoo around the world. Tiergarten Schönbrunn zoo that opened in 1752, that located in Vienna. This zoo is considered as a scientifically administered zoo where the main purpose is the conservation of species and the creation of awareness about the requirement for such protection.

Austria is also a winter sports paradise for tourists or sport lovers. It has around 400 ski resorts and reckons in loveable destination for players. Tirol is a place in the state that provides the best skiing opportunities. It has a lot of facilities and attractions for visitors of all kinds. Safety is the uppermost concern in the state that’s why ski resorts should compulsorily maintain high technical standards of facilities.