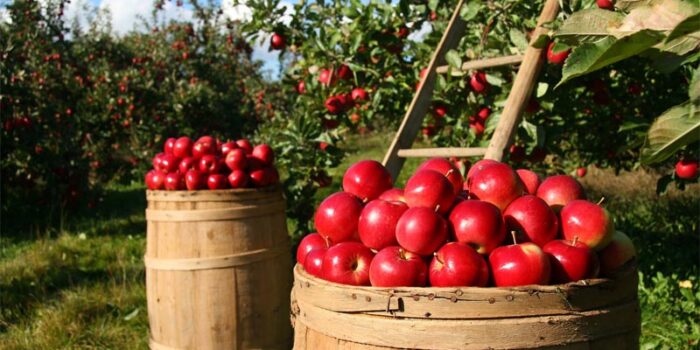 An apple is a sweet and tasty fruit that cultivates in all around the world. It is grown worldwide that most famous species of apple are genus Malus. Apple deciduous trees are generally huge if grown from seed. Usually, apple cultivars are propagated by transplanting onto rootstocks, which control the size of the tree. There are more than 7,500 recognized cultivars of apples, resulting in a range of desired features. Different cultivars are raised for numerous tastes and use, including cooking, eating raw, and cider production.

You know for the production of one single apple required 50 leaves energy. Pomology is the study of fruit that how it raises including its all processes. There are many interesting and bizarre facts about the apple that everyone should know.

10: Member of the rose family

You know one of the interesting and bizarre facts of apple is that it, associated with the family of rose. Rose is a beautiful, as well as favorite flower of everyone. Rosaceae is having middle size family of flowering plants. It got the name from the sort of genus Rosa. This family has herbs, shrubs, and as well as trees. Most of them are including in deciduous but some are also evergreen. Many fruits like pears, apricots, plumes, preaches, raspberries, and most important apple, also linked with the same family.

After the research of several decades, the U.S Department of Agriculture collected data about apples from all over the world. you know initially, it originated in central Asia, which counts in the interesting and bizarre facts about apple. The apple trees found in this area are supposed to be ancestral because they retain a robust, undistinguishable genome. People have been grown it for thousands of years in Asia and Europe, and later it was brought to North America through European colonists. In Central Asia, where its wild ancestor species ofMalus sieversii, is still found now.

Interestingly, there are almost 7,500 varieties of apple are available in the world. In which some are highly important and tasty, we’ve rounded up 11 that characterize the variety found in today’s marketplace. Some, like the Red or the Golden Delicious, are favorite of majority in the United States. Others, such as Cameo and Fuji, are relatively newcomers in the apple market.

Apple has been growing for centuries, the “modern” form of apples have been cultivated for several qualities like shape, taste, and high production. There are also many other varieties of apple-like Autumn Crisp, Baldwin, Black Oxford, Cox’s Orange Pippin, Ginger Gold, and many more. Interesting facts that apple is grown in all 50 states of America because it consumes highly after orange juice.

Boron is a mineral that is available in some food items such as nuts, fruits, and atmosphere. It is used to minimize boron deficiency, menstrual pains, and vaginal infections. Sometimes it used for physical performance, osteoarthritis, weak or brittle bones. People take it in the form of supplements to improve their deficiency in the body. Interesting facts about the apple that it already contains high levels of boron, which stimulates electrical movements of the brain and increases mental attentiveness.

Many apples are found that have excellent taste, smell, and color. But you know one of the most expensive apples is Sekai Ichi, it is a modern Japanese variety of apple that is costly as well as comprises upon largest apples. It is similar like famous red delicious and golden delicious apples. The interesting facts about it, that this type of apple is costly because it needs extra attention during the growing season. It finds in around $21 for each piece.

Besides multivitamin fruit, a medium-size apple contains nearly 80 calories. These are found free in fats, sodium, and as well as cholesterol. It is also an excellent source of fiber. You know .25% of an apple’s volume contains air, that’s why they float in the water. Apple seeds contain an element that, called cyanide. Don’t worry about it; you know consuming apple seeds will not kill you because your body is capable of metabolizing small amounts of cyanide.

The interesting, as well as strange facts of apple, is that you know eating an apple is also phobic for some people that is called Malusdomesticaphobia.

Malic acid is a natural composite with the molecular formula of C4H6O5. It is a dicarboxylic acid that is prepared by all living organisms, that contributes the sour taste to fruits. The salts and esters of malic acid are called malates. Interesting facts of Apple have this malic component, which helps to whiten teeth– the same chemical used in products designed for teeth whitening.

02: Source of fiber and iron

A famous proverb is “an apple a day keeps the doctor away”. Mean with the help of one apple you can remain healthy for a long time, and diseases will remain far from you. Certainly, it can be said rightly because apple has some essential items that make your body strong. For example, a medium apple contains 4.4 grams of fiber that helps in weight loss, maintain a healthy weight, minimize the risk of cancer and heart diseases, etc. Iron is another element that is essential for the human body, over 50 again a person should aim to consume at least 8 milligrams of iron per day. Interesting facts that, a single apple contains around .31 milligrams of iron.

You know other items like apple has religious and mythological importance in many cultures like Norse, Greek, and European tradition. One of the problems that are identifying apples in religion, mythology, and folktales is that the word “apple” was used as a generic term for all fruit, other than berries