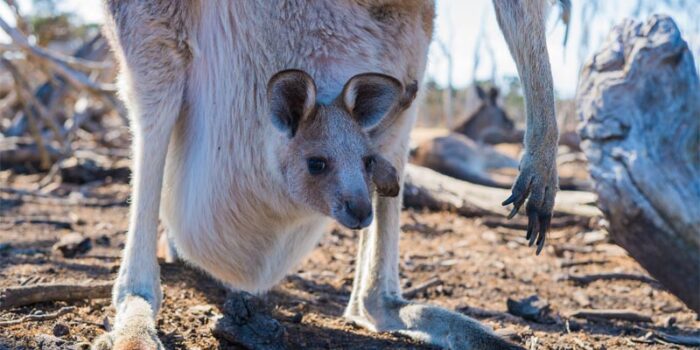 Australia is officially called the Commonwealth of Australia. It is one of the largest states in Oceania and, as concerned with the area it comes in the 6th largest state around the world. Australia is a highly developed and prosperous country that has multiple interesting facts. It includes the largest capitalist economies of the world having a GDP of US$1.57 trillion. Its total wealth is 6.4 trillion dollars that are about 1.7% of the world’s economy. As a high-growth, low-inflation, low-interest-rate economy, it is more vivacious than ever earlier. Its government sector is so efficient, having a flexible labor market and competitive trade sector.

Enchantingly, Australia is the biggest island and the smallest continent around the world. It is the only nation to ruling over an entire continent and its outlying islands. There are also so many interesting and fun facts about Australia, may you not know?

10: Kangaroo is the national animal

Kangaroo is the national animal of Australia; you know they are around 17 million here. They are approximately more than half of the total population of citizens in Australia. Interesting and fascinating facts that Kangaroos cannot move backward, as ironically it symbolizes Australia is moving forward nation.

One of the strange and interesting facts of Australia, that they love to eat Kangaroos’ meat because it is very low in fat and has a tasty flavor. It gets very hard when overcooked, but with a little care, it becomes a very delicious dish. People didn’t touch its meat in the past but, now it is a very popular dish and, every restaurant’s menu must have it. Amusingly, it is the only nation that eats its national emblem.

Australia uses unique health treatment for multiple illnesses. It counts in one of the interesting facts of Australia that it has a distinctive health treatment that is around 40,000 years old. These indigenous cultures and curing techniques seem to be the ridiculous oldest in the world as a developed and fast nation. They use this unique treatment for difficulties and illnesses such as depression, cancer, and substance abuse with old techniques.

08: The longest fence in the world

Australia has 5,530 kilometers long “dingo fence” that considers as the longest fence in the world. It has 75 million sheep that keeping for meat and wool, and almost all of them are in the southeast of the continent. Specifically, its export has a significant role in the economy of the state. The fence made for the protection of sheep from the Wild dogs, dingoes that find here in abundance. These lovely sheep are a tasty snack for hungry predators, that why Australian started building fences to keep the vermin out.

Australia has one of the interesting and fun facts about the Ugg Boots that finds everywhere and provides warmth in a cold environment. You know initially these boots created in Australia. When these boots landed on American shorelines, a company named Decker decided to copy them and, after a marketing blitz in which some celebrities authorized the production, they became a runaway hit. Decker’s owner became greedy and rapidly trying to shut down Australian manufacturers of ugg boots, for using the now-trademarked name.

Australian manufacturers had been selling the boots for many years. The Australian producers took their claim to court, explaining that “Ugg” was just a slang word for “ugly,” and thus the trademark was unacceptable. Luckily, the court took the side of Australians.

One of the baffling and interesting facts of Australia is Marree Man. It is an up to date geoglyph whose creator has not been discovered yet. Marree man comes into view to describe a native Australian man who was hunting with a boomerang or stick. It lies on flat terrain at the Finnis Springs 60 km west of the township of Marree in the middle of South Australia.

The figure of Marree man is 2.7 km tall with a perimeter of 28 km expanding over an area of about 2.5 km2. Even though, it is neither one of the huge geoglyphs in the world that’s origin remains as a mystery. No one is claiming its responsibility for creating and nor any eye-witness having been found. It is probable to remain a controversy for years to come. The specific area also having a drawing spot has been the focus of a land dispute between two different native groups who hold opposite viewpoints on how the land should be used.

05: Mostly Australians live on the shoreline

You know most of the Australian lives on the east shoreline of Australia. Around 60% of people live in New South Wales and, Queensland roughly represents 2–5% of those state’s populations. Australia has a vast and diverse shore. Additionally, it consists of the 6th largest of any state and has a variety of sandy beaches and dunes, rocky shores, tidal flats, and bays.

04: 80% of the unique creatures in Australia

One of the facts of Australia is its unique creature that comprises around 80%. The Australian animals are some of the most fascinating creatures in the world, from cuddly mammals to a huge assortment of birds. You can see the flora and fauna of the country, from zoos and parks to spotting these unique creatures in the wild. Kangaroo is its national emblem and you can easily find it in the fields and farmlands of South Wales but, koalas and platypuses are a little more elusive. So, if you want to see them in the natural world, so your guider will show you the spots where they often hide.

Like other nations, Australia also has invented a lot of useful things that are making our lives day by day easy. These inventions include interesting and fun facts of Australia. Like ultrasound, Vegemite, the tank, football, the refrigerator, the pre-paid postage, the Black Box flight recorder on airplanes, lawnmowers with engines, smoke alarms, aspirin, electronic pacemaker, penicillin as well as first plastic spectacle lenses, etc.

The world’s unique white whale just only finds here, which consists of fun as well as interesting and fun facts of Australia. This unique whale first viewed in 1991, named for an indigenous Australian word for “white fella”. Humpback whale is a type of baleen whale that is also called “Migaloo”. During the visit of the spring and autumn seasons, you can see this marvelous whale.

You know besides other fun and interesting features and facts of Australia, there is a lake that looks beautiful and stunning. It is ‘Pink Lake’ that’s water’s color that looked spectacular. Pink Lake is a salt lake that reckons in interesting and fun facts of Australia. It exists in the Goldfields-Esperance region of the Australian west. While in the past, the water in the lake was visibly pink. But, unfortunately, after 2017, it had not been pink for over ten years. The salt concentration is fundamental for the pink hue. Pink Lake may again turn into a pink color when conditions change.