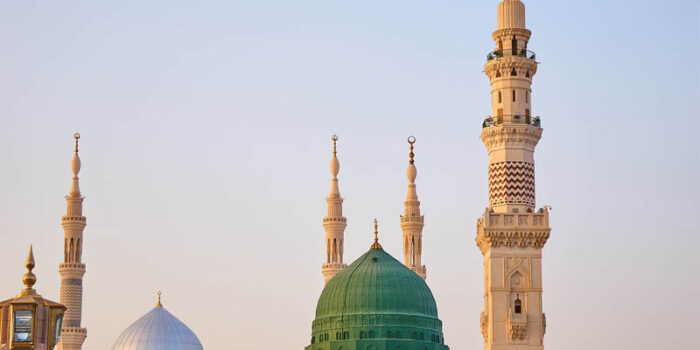 Dome is an architectural component that is similar to the upper semi part of the sphere. It is a curved structure that usually forms at the ceiling. Various substances have been using throughout ancient times by numerous civilizations. Prehistorically domes made by solid material. Many hemispherical compositions styles adopted several civilizations in a diverse period. Interestingly, Domes not only adopted by Muslims but other religious people also. In this list, there are the top 10 famous domes around the world. Have a look!

The dome of the rock, Jerusalem has one of the famous domes around the world. It is an octagonal shape dome is one of the oldest shrine and existing Islamic buildings. Umayyad Caliph Abd-al-Malik custom-built the rock of dome in the 7th century. This famous dome built on the holy rock. Muslims believed that it is the place from where our Muhammadﷺ at the night of Miraj ascended to Heaven. Shrine’s dome has a diameter of 20 m and a height of 20.4 m. Furthermore, it was made of gold but later changed with aluminum. Its external side of the dome, covered with multiple colorful Persian tiles.

Putra mosque is in Malaysia. It has one of the 10 famous domes. Its construction started in 1997 and within two years it has completed. It placed near a man-made Putrajaya Lake. It has famous pink-domed and it has a capacity of 15000 worshippers at one time. Its basement wall resembles King Hassan’s mosque in Morocco.

Eden project is the largest greenhouse in Cornwall. This project completed in two and a half years. It opened its doors to the public in 2001. The Eden Project has dominated by two enormous areas consisting of adjacent famous domes, which have different species of house plant species around the world. The plastic cells maintain steel frames.

Lotfollah Mosque constructed in the early 16th century in Isfahan, Iran. It is one of the structural designing masterpieces of Persian architecture. Lotfollah was the private mosque of the royal court because it is small in size and doesn’t have minarets. In ancient times it called the domed mosque because of its beautiful and famous dome.

Saint Basil’s Cathedral knows as “The cathedral of the intercession of the Virgin by the Moat”. After commissioned by Prince Evan, it built between 1555—1561. It has a total of nine chapels that have the same base. This cathedral is a famous dome because of its attractive and beautiful colors and shapes. It has eight domes chapels, four chapels are in octagon shape and others in small shaped. Its ninth chapel that is placed in the center is furnished with a remarkable golden famous dome.

Read More: Top 10 most famous walls in the world

Pantheon temple built in 126 AD, Rome. It constructed for the Roman gods and served as Catholic Church in the 7th century. This temple has a concrete dome with a middle opening the oculus. It built approximately two thousand years ago. The pantheon has one of the top 10 largest and famous domes around the world.

Mughal emperor Shah Jahan’s ordered to build the Taj Mahal for the memory of his beloved wife, Mumtaz. It is an immense white marble’s mausoleum in Agra. Its most remarkable feature is its famous dome that has almost 35 meters high about the same as the length of the base. The top of the famous dome decorated with a lotus design.

In India, Sanchi is the most significant Buddhist asylum. This place consists of palaces, monolithic pillars, temples, and monasteries. Great Stupa is a famous monument in Sanchi. In the 3rd century, it was the ancient stone in India. In 1989, the UNESCO world heritage site recognized it. At the center of Chamber, there is a place a large and famous Stupa dome

The Shah Mosque (or Imam Mosque)in Isfahan, Iran regarded as one of the masterpieces of Persian Architecture. Its construction started in 1611, especially the magnificent building is famous due to the beauty of its seven-colors mosaic tiles and calligraphic inscriptions. The Safavids dynasty started a renaissance in Persian famous dome building and the dome of the Shah Mosque would become the tallest in Isfahan reaching a height of 53 meters. The distant characteristic of this and other Persian domes was the colorful tiles, with which they covered the exterior of their domes, as they would on the interior.

The most famous Prophet Muhammadﷺ has a green colored dome at the tomb of the mosque. Its dome situates in the South Eastern corner of Masjid-ul-Nabwi in Madinah. In 1279 an unpainted timber cupola built on the tomb. It rebuilt and painted again with multiple colors in 1817. In 1837, the dome was first painted with green color. After that, it remains the color of green. Hence it named a famous Green dome.