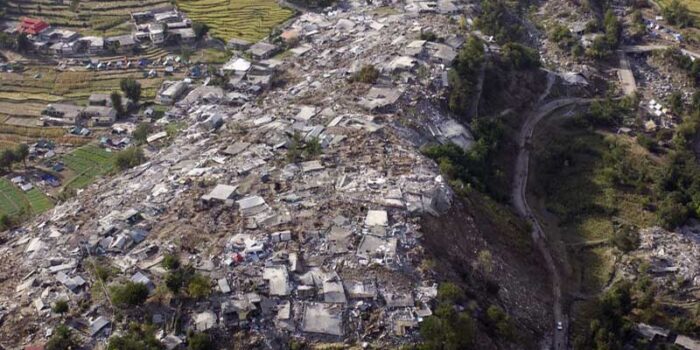 An earthquake is a result of shaking Earth’s surface with a quick dispensation of energy in the lithosphere of the earth creates “seismic waves”. Earthquake’s frequency is varied from place to place. At the surface of the earth, it manifests themselves by trembling and displacing the land. When it occurs offshore it causes the reason for Tsunami. An earthquake can cause of land sliding and sometimes volcanic movements. It brings a lot of change on the ground levels and people’s life. Now we shall talk about the 10 devastating and biggest earthquakes in the history of the world.

It occurs in Valdivia, Chile on 22nd May 1960. This devastating earthquake took the lives of almost 1655 individuals and it injured 3000 people. Approximately, 550 million US dollars wasted cause of the earthquake. Earthquake’s “rapture zone” was far more than 100 km; roughly its magnitude was 9.4 or 9.6. initially, after two days of the happening earthquake, the nearest volcano point began to erupt and producing ash up to 6km in the environment for several weeks.it counted in biggest earthquakes in history.

In 11th March 2011, an earthquake occurred in the city of Sendai, Japan. Its epicenter was 70km Far East of the Oshika Peninsula. It had a magnitude of 9.1 undersea megathrust earthquake. The duration was 6 minutes was recording as the most powerful as before and counted as the 4th biggest earthquakes in the history of the world. It created a tsunami in Japan’s mainland area and killed approximately 10,000 people. According to the report of confirming deaths are 15899 by “Japanese National Police agency”.

In 2004 at the city of Sumatra in Indonesia, an earthquake and tsunami occurred on 26th December. Its center was the Indian Ocean that connects both countries India and China. Its magnitude was of 9.1Mw. This earthquake began to occur because of rupture in the fault between the Indian and Burma plates. It damaged almost 15 billion US dollars. According to documentation, it was the 3rd biggest earthquake in the history of the world. It had the longest duration of approximately 8-10 min observed. The report of the US Geological Survey the total deaths were 227,898 and it created severe destruction in Indonesia.

The earthquake occurred in the Rat Islands of Alaska in 1965. It had a severe magnitude of 8.7 and created a tsunami at 10m in Shemya Island. But, luckily it brought little loss. It created flood through a tsunami that caused worth of 10,000 US dollars loss. Slightly damages were recorded at cracks on roads. whatever, it counted in the biggest earthquakes in history.

On 15th August 1950, an earthquake took place at Assam and Tibet. Its magnitude was 8.6 and epicenter, placed at the hills of Mishmi. This area is Arunanchal Pardesh is still disputed land between India and China. This brought destruction for both states Assam (India) and Tibet (China). It killed around 48,000 people. It included the 6th biggest earthquakes in the history of the world.

At the Kamchatka Peninsula, three earthquakes occurred in 1737, 1923 and 1952. These caused tsunami and the type of megathrust. They all happened on the coast of the Pacific plates. These created a lot of destruction in the lives of people. Many people lost their lives caused by these deadly earthquakes. that’s why it counted in the biggest earthquakes in history.

At the greatest earthquake occurred in the Prince William Sound, Alaska in 1964. It took almost 128 lives. Its shook time of earth’s period was around 3 min. it caused heavy land sliding. Trough the estimation loss of property was 311 million dollars.

On 31st January 1906, an earthquake occurred in the land of Ecuador, Colombia. It was a destructive tsunami having 8.8Mw magnitudes. It is kind of a megathrust earthquake. Its rupture zone was 500-600 km long. On the coast of Rio Verde, Ecuador and Micay happened the greatest damage from the tsunami. Several deaths showed a discrepancy between 500-1500. It considered the biggest earthquake in the history of the world.

Sanriku earthquake happened on 2nd December 1611. It had an intense magnitude of 8.1Mw. It brought a destructive tsunami. In this period earth shook 3 times consecutively. According to the estimation of old documentation, almost 1783 people killed there. It added to the biggest earthquakes in the history of the world.

An earthquake occurred in the areas of Azad Kashmir, Muzaffarabad, Pakistan and it affected the northern side like Khyber Pakhtunkhwa province on 8th October 2005. It also got an effect on nearby countries like Afghanistan, China, and Tajikistan. It was a very severe earthquake that brought destruction. According to Pakistan’s government, almost 87,350 people lost their lives. It affected more than 50 thousand families. The earthquake’s magnitude is recorded at 7.6 severe magnitudes.