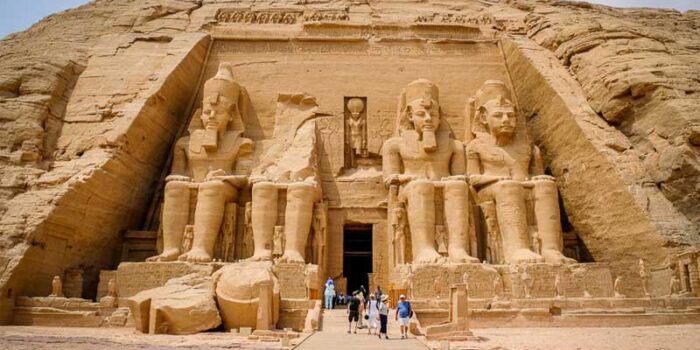 Temple is derived from the Latin word “templum” and a place for worshiping religious or spiritual customs. It consists of such buildings as a church, shrine or synagogue. Egyptian temples shaped for the devotion of the gods’ remembrance. In these temples, Egyptians perform different rituals and functions, of their faith. These rituals can be seen in beautiful ancient Egyptian temples. Thus, Egypt’s tour wouldn’t accomplish without visiting one of these temples.

Temples are depicted into two kinds:

Medinet Habu is one of the top 10 beautiful ancient Egyptian temples. It placed in the West Bank of Luxor. This temple is the type of Mortuary. It has designed in a conservative style and resembles Ramesses II. Its length is approximately 150m. The walls of the temple, fairly well preserved and encircled by mud bricks. The innovative entrance is through fortified gatehouse that is called “Migdol”

Karnak, derived from the Arabic word “Khurnak” which means fortified village. The region around Karnak was the oldest Egypt and the place of worship around the 18th dynasty. It is a kind of Cult temple where people come to worship god. It is one of the oldest sites on the planet that took centuries for completion. But the majority of work was done by pharaohs of the new Kingdom in 1570-1100 BC. The most renowned construction of Karnak is the Hypostyle Hall and a lobby territory.

Kom Ombo is one of the ten unusual and beautiful ancient Egyptian temples. It is in the town of Kom Ombo in Egypt. So, It built during the period of the Ptolemaic dynasty in 180-47BC. It has exclusive buildings because of its dual design building and that have courts, halls, temples, etc. Its southern half part was for crocodile god “Sobek” and the half northern part for falcon god “Haroeris”. Hence, this is a classic temple because everything arranged along the main axis.

Temple of Philae was the hub of the goddess’ cult. It knows as one of the beautiful ancient Egyptian temples. Native Pharaohs of the 30th dynasty constructed this temple on Island. In the time of Greek and Roman rulers, this temple’s construction continued till three centuries. In 100 AD Trajan’s Kiosk built by the Roman Emperor Trajan. The other part of the temple and monuments were transported to Agilika Island. This decision took due to saving it from the water flooding of Nile and Aswan High Dam.

This temple of Edfu, devoted to the Falcom god Horus and it is the 2nd biggest ancient Egyptian temple. it is in the west bank of Nile. Its construction started in 237BC during the period of Ptolemy III. This completed after two centuries in 57BC by Ptolemy XII (Cleopatra’s father). This temple was the hub of different festivals blessed to Horus. Every year Hathor traveled to visit the temple of Edfu and this occasion of their holy marriage of a great festival and pilgrimage.

Temple of Seti I is the monument temple of the New Kingdom. It is in Theban Necropolis, Upper Egypt. This structure is located near Kurna town. It is a type of mortuary temple of Pharaoh Seti on the west of Nile. It was one of the beautiful ancient Egyptian temples. Now it’s the whole court and its associated sites have ruined. Its eastern part has buried under the Kurna town.

The Luxor Temple is in the eastern bank of river Nile in the oldest city of Thebes and it originated in 1400 BC. Its total area is 28.5336 sq m. This temple was related to three Egyptian gods. It is the hub of Opet’s festival. Unlike other temples, Luxor is not a cult temple even it devoted as the temple of kingship. Now Luxor is a foremost travel point in upper Egypt.

The temple of Hatshepsut is in the west bank of the Nile. It built for the Hatshepsut, who ruled here approximately around 1458 BC. This is located below the cliffs of Deir-el-Bahari on the west of Nile. It is scrutinized as one of the unparalleled monuments of beautiful ancient Egyptian temples. It has three layered terraces with 30 meters height surrounded by gardens.

Abu Simbel is a rural community in Nubia, Egypt. It is located near the border of Sudan about 240 kilometers southwest of Aswan. Rames II built this temple. According to 2012, it had 2600 inhabitants. Abu Simbel displaced to Aswan Governorate in the 1960s to save it from the River of Nile.  This is a marvelous piece of the temple and from all over the globe tourist comes here every year.

Ramesses is one of the beautiful ancient Egyptian temples. It is a type of mortuary temple of Ramses II. Pharaoh also constructed it like Abu Simbel and Seti I. After the death of Ramses II the temple built for the memory of him and worship. It has a paramount significance of ancient Egyptian religion