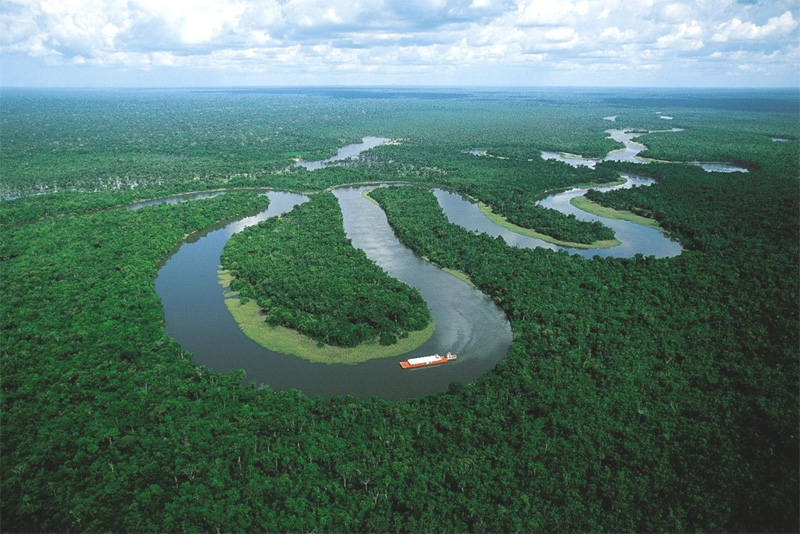 Rivers are a major part of the hydrological circle. They are habitant of several creatures and carry the nutrition of earth as well. It uses for drinking water, transport or getting food, etc. but when we talk about the length of the river. It is a disputed matter and no one can give an exact answer to this question because rivers are not persistent. But we can give a rough overview of the length of rivers. Below the list is considered to be the 10 longest rivers in the world.

The Amur River considers as the 10th longest rivers around the world. It is placed between the borders of the Russian Far East and Northeastern China. A roughly estimate about the length of the river is 2,824 km. Here you can get the largest fish species of Kaluga, which attains a length of 5.6 m. Amur’s basin is a hub of a huge variety of predatory fish as northern snakehead, Amur pike, taimen, Amur catfish, predatory carp, and yellow cheek as well as the Amur softshell turtle and Indian lotus also finds here.

During the dictatorship of Mobutu Sese Seko Congo River, recognized as the Zaire River. The largest river in Africa is the 2nd longest rivers around the world as well. It extends up to the length of 4,700 km, shorter than the Nile. The Congo river’s drainage basin covers the area of 4,014,500 square kilometers that is larger than India. Even though the Livingstone Falls stop access from the sea, almost the entire Congo above them is readily navigable in sections, particularly between Kinshasa and Kisangani.

The Parana river subsists in South Central American and streams through Brazil, Paraguay, and Argentina for around 4,880 kilometers. It considers as the 8th largest rivers in the world. It got the name from the language of Tupi that means “like the sea.” Maybe it obtains its name due to the enormous length. Firstly, it combines with the Paraguay River then it comes to contact with the Uruguay River to form the Rio de la Plata, and afterward, it empties into the Atlantic Ocean. Furthermore, it is also the hub of 2nd human-made dam in the world.

The Ob River is the main river in Siberia, Russia, and ranks in the number of 7 all around the world. It recognizes in the 3rd longest rivers of Siberia that flows into the Atlantic Ocean. It spreads up to the area of 3,650 km. Ob Irtysh delivers clear drinking water, hydroelectric energy, as several species of fish as well. Now this river is utilizing for irrigation and fishing.

The Yellow River or recognizes as Huang He is 2nd longest river in China but the 6th longest rivers all over the world. The total estimated length of the Yellow River is 5,464 km. Yellow river runs through 9 provinces of China that drains into the Bohai Sea. Now this river is used to generate electricity and as well as consuming for aquaculture.

The Angara River finds on the premises of Siberia that is 1779 km long. It drains in the Baikal Lake which is the largest among lakes. After that, it flows through north past the Irkutsk Oblast cities of Irkutsk, Angarsk, Bratsk, and Ust-Ilimsk. Then it finally turns to the west and enters the Krasnoyarsk Krai, and joins the Yenisei near Strelka. Since the 1950s four dams of main hydroelectric plants constructed to exploit the waters of the Angara River. it also ranks in the longest rivers in the world.

The 4th largest rivers of the world considered Mississippi River. It recognizes as the 2nd largest drainage organization of the North American continent. Generally, it runs to South for 2320 miles to the delta of the Mississippi River in the Mexican Gulf. It has divided up into three sections including, Upper, Lower, and Middle Mississippi. The freshwater flows from Mississippi to the Gulf of Mexico and doesn’t blend with salty water immediately.

In Asia, it is the longest river and the 3rd largest rivers in the whole world. Entirely it flows inside China. it increases at the hills of Jari in the Tanggula Mountains and runs around 6,300 km to the direction of Eastern China’s Sea. This river is supporting almost 1/3 population of China for multiple purposes like irrigation and transportation.

The Nile is 2nd world’s largest rivers all over the world. It flows through the continent of Africa. Through some resources, it is also considered as shorter than River Amazon. Still, this matter disputes whether it is the top largest river or not. Roughly estimated that it has a total mass of area is 6650 km. Additionally, it is also a particularly prime source of water in Egypt and Sudan.

The Amazon River is the largest rivers around the world. It acknowledges the largest river in South America. The total length of the river is around 6,575 km. Initially, Amazon was famous as the Maranon, later in Spanish and Portuguese it called by Rio Amazonas and By the English language, it calls as Amazon River. It also considers the biggest drainage system in all over the world.

Top 10 Peaceful Countries According to GPI

10 most advanced and well-equipped hospitals in the world

Top 10 most hazardous bridges you shouldn’t use

Top 10 longest rivers around the world