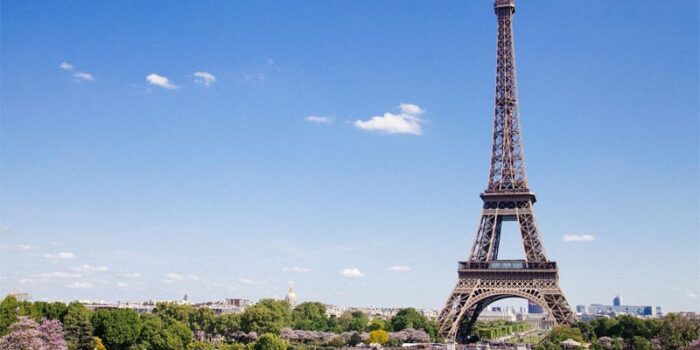 France is the largest state in Western Europe, which has long been a gateway between the continent of northern and southern areas. It has long borders that are linked with Germany and Belgium on the northern side, the Atlantic Ocean lies in the west, and the Pyrenees mountains and Spain are in the south. It also shares borders with the Mediterranean Sea on the southeastern side, and the Alps, Switzerland, and Italy exist in the east of France. France is an outstanding state, which has a lot of interesting facts.

10: Eiffel Tower is in Paris

The Eiffel Tower considers as the majestic structures on the Earth. Originally, it has planned to be constructed in Barcelona, not in Paris, the city of France. It is one of the most attractive and remarkable landmarks all around the world. While visiting France you must go to the tower at night, you’ll also enjoy a delightful presentation of the Eiffel tower lights. No doubt, the Eiffel tower is unique, and a great masterpiece of France. As, the Eiffel Tower is a fragment of Paris, which is iconic. Moreover, it is also one of the beautiful and famous structures in the world and a common tourist attraction.

09: Legal to marry a dead person

Besides the interesting facts of France, one of the unusual facts is that you can marry a dead person in France. I know it looks ridiculous but, it is true. Yes! you can just marry a dead one, with the permission of the president of France. This trend initially started in the 1950s. When a lover of a man who killed after a dam burst in Frejus turned to Charles de Gaulle. Then, president, who permitted them to continue their marriage plans. Post-mortem marriage was also prevalent in France as it was necessary for women who wanted to safeguard the authority of children whose fathers died on the front lines during and after World War I.

Another magnificent and interesting fact also linked with France which considers as the state’s biggest inventions, also made in the field of medicine. Did you know that the first artificial face transplantation is also taking place in France? It is a medical procedure to change all parts of a person’s face using donor tissue. Individuals who suffered trauma, burns, illnesses, or genetic disabilities can get benefit from this procedure. The first partial transplant had performed on 27th November 2005, in France.

Isabelle Dinoire who was 38 years old experienced surgery to replace the original face which was severely damaged by her dog. In the New England Journal of Medicine, a report published about the detailed transplantation in December 2007. The patient was fully contented with the results of the transplantation. And, at the same time, the reaction of her immune system, and the attained result was complexed.

Tourism is a vital financial support for France, approximately 9.7% of the country’s GDP is dependent on it. Around 85.7 million international tourists from other foreign countries have visited France in 2013. Interestingly, no other country achieved these 70 million marks in around the world with and according to US recording 69.8 million visitors. More than 6.2 million international visitors just come from Switzerland. France is sharing borders with eight other states and this makes it easier for tourists to access the country. Though Germany is also sharing its borders with nine other states, while China and Russia are sharing borders with 14 countries, and they are actually near to France.

This day denotes the day in 1789 when Parisians attacked Bastille, a fortified prison that held political prisoners who were condemned by the state’s monarchy. Interesting facts that French people celebrate it as the national day of France. You know Europe’s first regular military parade also conducted during this day and is witnessed by the President of France.

Besides interesting facts this one is also linked with France; you know a 10-second fragment of the song Au Clair de la Lune was also recorded by French inventor Edouard-Leon Scott de Martinville. He used a ‘phonautograph’, which permitted sounds to be recorded also visually. In 2008, the paper recording also discovered in 2008 in Paris, with using modern science the clip was also played the first time.

Interesting facts of France that the world’s most popular day was also originated in France which is fool’s day. It is celebrated on 1st April every year.

03: Oldest human ever was also French

A French woman has also attained the award of the oldest even human being in the Guinness Book of World. She lived to an unbelievable age of 122 years and 164 days. Jeanne Louise was born on 21 February 1875 and died on 4th August 1997. She has seen the opening of the Eiffel Tower in 1889, two World Wars and the development of television, the up-to-date motor car, and airplanes. Interesting facts that France has rated as the sixth in the OECD for life span at birth at 82 years: 85 years for women and 79 for men.

Mont Blanc is one of the famous and highest mountains in the world. Approximately it 4,810m in height, takes an arduous 10 to 12 hours to climb to the summit. Otherwise, for reaching here you can take a relaxed trip of the 20-minute trip up on Europe’s highest cable car on the nearby Aiguille du Midi to get a brilliant view of Mont Blanc.

01: The Louvre Museum in Paris also most visited museum

The Louvre Museum is famous as the most visited museum in all over the world. Interesting facts that with an astonishing around 9.3 million visitors, visited France. You know it received around the same amount of people as compared to the population of Sweden.