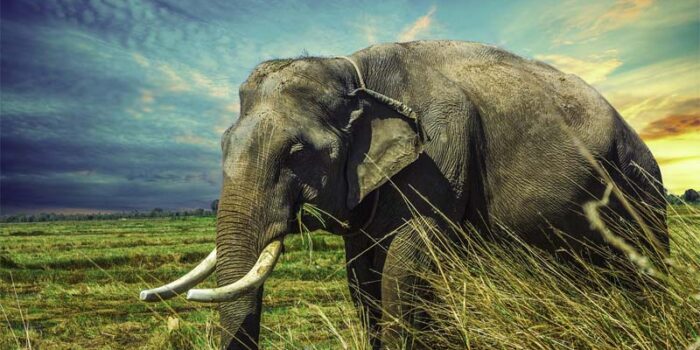 Elephants are the largest creatures in the mammalian world, they also consider in those mammals who can’t jump. But they can run at a maximum speed of 25 miles per hour. Yet even when they are running at their fastest speed, they still keep at least one foot on the ground at all times. The word “elephant” derives from the Greek term “elephas” which means “ivory”.

Three different species exist in the world like – the African Savannah Elephant, the African Forest Elephant, and the Asian elephant. The elephant is an amazing creature having interesting and fascinating facts about its life. You know if an elephant dies than its family takes very good care of its bones. Every year, 12 August is celebrated as the World’s Elephant day. You will get more interesting and fascinating facts about elephants.

The elephant is a giant creature in land animals. They have multiple interesting and fascinating physical features and facts. Male elephants can raise to 13 feet tall at the shoulders, measure up to 30 feet from trunk to tail, and gain weight up to 14,000 pounds. It has almost an inch-thick skin but, very sensitive that it can feel a flyover its boy. Just its trunk has 400 pounds weight and 100,000 muscles in the body. Except for the giant body, the texture of the elephant has fascinating and interesting physical facts like finger-like appendages at the tip, they’re also quick enough to pluck a single blade of grass. They have an extremely developed brain it is 3 or 4 times larger than humans, although it is smaller enough to fit in his huge body.

Elephants have exceptional huge ears but poor hearing. It has also bad eyesight but a remarkable sense of smell. It has an extremely slow pulse rate, around 27 beats per minute compared to humans are very low. The elephant’s trunk is called a proboscis, that only contains 16 muscles. It’s very parallel to their early ancestors, the mammoth and mastodon, with a bulky muscle on the top and sides of the trunk allowing elephants to raise it. There are also present thousands of smaller muscles called fascicles, or bundles of muscle fibers, that permit for finer movements of the trunk. It also uses for breathing, taking food and water to the mouth, and grasping multiple objects.

Elephant’s tusk also never halt growing, so huge tusks can be a sign of an old elephant. By looking you can guess how old an elephant is? Both male and female African elephants raise tusks, but only male Asian elephants raise them not their females.

The skin of an elephant may seem full of wrinkles like your 80-year-old granny. But it is helping it to keep skin healthy by holding in moisture. After they taking a mud bath, the wetness of the mud remains in the wrinkles to continue softening the elephant’s skin. Despite the huge body they have incredibly poor digestion, with only 50% efficiency. As a result, they release an unbelievable amount of gas “methane” and produce around 250 pounds of manure a day.

09: Elephant families are led by females

The Elephant’s way of living is different than other animals. An interesting and fascinating facts about elephants is that their females lead their family. The female elephant lives in a family unit also called a herd, that is up to 25 elephants with a female elephant in the lead. When male elephants reach the age of puberty, they leave their family or may live alone or with other male elephants. But adult males continue interaction with other family members while looking for a mate whom willing to make continue their generation.

Their capacity for drinking water is also extraordinary. A huge elephant can drink almost 80 gallons of water in a single day. As the smell of water is so familiar for them, they can identify it from a distance of 3 miles. Like interesting and fascinating facts of drinking water of an adult elephant, it also spends around 16 hours eating the whole day.

One of the interesting and fascinating facts about elephants is that they sleep very less. Just 5 hours of sleep at night is enough for them that is diverse from other mammalian creatures. An adult elephant sleeps while in a standing position. Deep sleep, though, necessary a bit more effort and the elephant would usually lay on its side while snoring out loudly. Not so different from humans.

Stimulatingly, the elephant has one of the interesting and fascinating facts that they are gigantic but emotional creatures like humans. They become emotional when they see someone dying. They remain silent and take time to lament upon the dead elephant, and sometimes they even cover dead bodies of relatives with grass or soil-like humans. Even they keep save the dead bones of their fellows and take good care of them.

It is also proven one thing that despite huge animals they often scared of ants and bees, which reveal that they are as well as emotional and gentle. They are highly sensitive and caring creatures. If baby elephants complain so the whole family attends it with care and soothes it.

Research has exposed that elephant’s communication over long distances using a sub-sonic rumble that can even travel over the ground faster than sound through air. Other Elephants receive these messages with the help of their feet and trunks. Researchers believe that this is how potential mates and social groups communicate with each other. They are as well as highly intelligent creatures that they possess’ multiple complex emotions and feeling with deep compassion. Elephants have large cortexes in their brains and are not born with existing skills. They have to learn these skills from other older elephants in the initial years of their lives.

One of the interesting and fascinating facts about elephant life is that they have a long gestation period which is diverse from other creatures. Their female being pregnant for almost 2 years (22 months) is longer than another mammalian. They only become fertile for a few days every year, during these days a lot of elephant male mates want to seek their mate. A newborn baby can weight up to 260 pounds and it can stand up shortly after being born. Surprisingly, elephants all new babies born blind, but they can stand instantly.

Like other interesting and fascinating facts about elephant, they have also an amazing memory. They don’t just have a huge mass of body but also their brain, as well as huge like body that can be up to 5 kg. They can save data and remember things for many years, it is not just skills that are essential for their existence but the sake of social learning as well. Elephants remember other individuals and can identify them when they see them again, even after several years.

Elephants love to take showers. You may have seen many elephants playing in the water. It is not a fun activity for them bit also delivers them some healthy benefits. During bathing, they suck water to spray on its body. In this regard, a trunk is a useful tool for them. After that, they spray dirt and mud on their wet coat, which acts as a sunscreen. Elephant loves showers, also counts in one of interesting and fascinating facts because many mammalian don’t like showers.

Their life span is like human beings they can just live up to 70 years. But sometimes they can not attain their average age due to multiple diseases or n case of any injury. Many hunters kill them for the sake of their ivory tusks. Which should be prohibited for their survival.