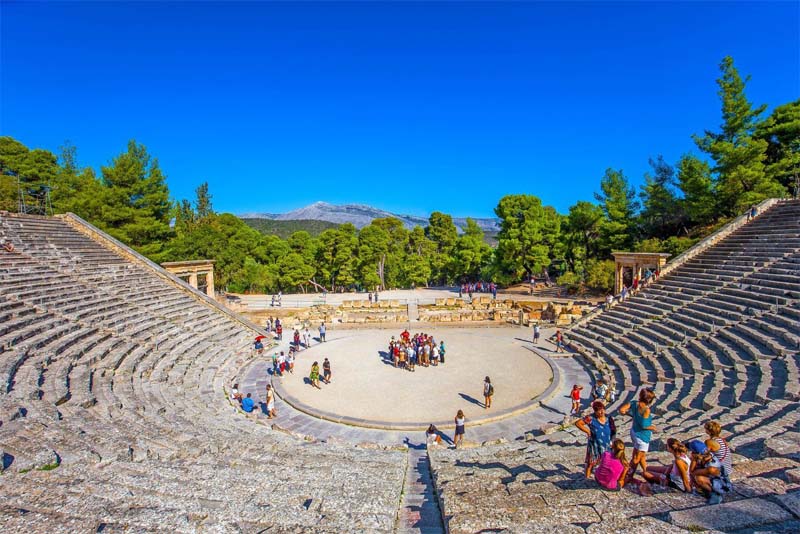 Theaters or cinemas are building that specified for the presentation of picture movies or entertainment. Theaters are a piece of art that provides amusement, entertainment, and refreshment in boring dull life. Everyone gets exhausted with daily routine life so these theaters provide relaxation. The theaters originated from the state of Athens. They used it for celebrated events, tribute honor to their gods, make a play about tragedy, comedy, and satire. in this article, you will find historical theaters around the world.

Greco-Roman theatre constructed in the 3rd century in Taormina Greek Colony. It located on the Island of Sicily. This historical theater, constructed with mostly bricks and according to the style of Greeks rather than Romans. The great section of original seats has vanished but the specific wall which surrounded the entire cavea, still preserved and the front scene of the theater is also the same as ancient theaters.

During the period of Emperor Domitian the south theater, constructed between the centuries of 90-92 AD. This theater has approximately 3000 seats for viewers. Its first stage was Ornate that consisted of a two-story building has rebuilt again and still using it now. The theatre has an outstanding sound system that enables a spokesman in the middle of the orchestra floor to be heard at the backside of the theatre. Hence, it counts in historical theaters around the world.

8: The Theater of Side

When we talk about the historical theaters over the world “the theater of side” is prominent in it, which is still in a good state. It has around 15000 seats for the audience. It has besides a famous resort town on the Mediterranean coast of Turkey. This city was originated by Greek in the 7th century. Now the theater existed in the province of Galatia at the main cultural spot. It drew the attention of the prominent people from the Mediterranean region.

7: The Roman Theater of Bosra

The ancient city of Bosra, located in Syria that is just near of southern Damascus. It knows as historical cities on the Universe. It built almost half of the 2nd century. This heater had also 15000 seats for the audience. In the Ayyubid dynasty, a fortress built around the theater. It is now the historical theaters around the world by Romans. It has a three-story building with wonderful acoustic sound and 35 rows of seating.

6: The Theater at Delphi

The historical theater of Delphi, constructed on a hillside. It gave viewers a glimpse of the whole landscape around it. It constructed in the 4th century BC. This theater has a space of 5000 audiences. After excavation and restored it was not in good condition. Its limestone block is cracking continuously and features are fading over time.

5: The Roman Theater of Amman

4: The Greek Theater of Taormina

The historical theater mostly built with bricks. It built according to the plan and arrangement of Greek. It established in the 3rd century. Later it renovated by Romans and counts in historical theaters around the world. The outstanding monument is now the place of Taormina Arte, the international movie dance and theater fiesta.

3: The Theater of Dionysus

The theater of Dionysus is one of the top 10 historical theaters around the world. It was first built in the mid of the 6th century. In the classical period, the Athenian drama performed during the celebration of Dionysus. It is one of the main religious festivals of the urban area. This theater had almost 17000 seats. It was continuously downwards in the period of Romans. It fully decayed in the era of Byzantine. Afterward, it excavated and renovated in the 19th century.

2: The Roman Theater of Orange

The Roman historical theater of Orange built under the supervision of Emperor Augusta in the 1st century. It closed in 391 A.D and regarded as unsophisticated spectacles due to the opposite of Christian’s Church.
It restored in the 19th century. During Roman times, this theater provided free audio guidelines to visitors with interesting knowledge about shows.

1: The Theater of Epidaurus

Undoubtedly the theater of Epidaurus is the most famous and best-preserved historical theaters around the world. Most people think it should be the rank of 1st in the ancient’s theaters. It constructed in the west of Cynortion Mountain near Lyqourio. This theater considered the perfect Greek theater concerning Acoustic sounds. It has almost fifty-five rows of seats for the audience. This theater had the utmost capacity of 13000-14000 viewers. It hosted music; dance and dramatic games integrated the worship of Asclepius. Even it used to heal the patients by showing dramatic shows. It noted a positive effect on their mind and physical health.