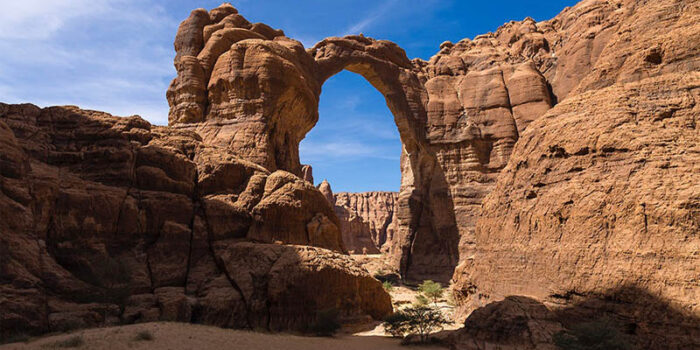 Rocks naturally form natural bridges or arches. Formally an arch has made with unlocking underneath. These are formed in inland cliffs, coastal cliffs, fins, or stacks from seas or rivers. Many beautiful arches exist all over the world that look perfection of God. A man should feel proud to get these natural achievements from God. There is a list of top 10 beautiful natural arches in the world.

Durdle door is a beautiful natural arch made with limestone that is in Jurassic Coast of Dorset, England. Privately it is a property of Welds family, who have a 12,000-acre place in Dorset by the name of the Lulworth Estate. But it is open for the general public and reachable place. Anyhow hikers try to reach along the steep difficult path with steps from Lulworth Cove. It is also one of the greatest and beautiful photogenic places for photography and natural arches.

Azure Window or “Dwejra Window” both names are called for this natural arch which placed in Gozo Island, Malta. The limestone quality which was near to the Inland Sea and Fungus Rock, that was popular among the tourists from all over the world. But ultimately it fell into the sea as a result of an intense storm in 2017. The arch was mutual with other natural features in this spot has appeared in numerous international films and media productions.

Moon Hill is a natural arch on a hill that’s why it became famous by its name. It exists in few kilometers far outside the Yangshuo in Southern China. This hill is a series of Guilin Mountains; an arch is a semicircular gap through the hill at the height of 750ft. From below the hill, the arch looks amazing and beautiful from far. Just travelers need 20 minutes to reach the top of the hill. Due to splendor, it considers one of the 10 beautiful natural arches in the world. It is also famous for tourist destinations in China.

The Arco Naturale is a beautiful natural arch made of limestone on the east coast of Capri Island. This arch looks amazing and spans at a height of 18 meters. Through the arch, the color and magnificence of the sea will leave you speechless. Tourists come here from all over the world to see this extraordinary spot. It consists of one of 10 beautiful natural arches.

Hvitserkur arch is a beautiful natural arch with 15m height that placed along the eastern shore of the Vatnsnes peninsula. This arch has made on a huge rock, with two holes at the base. These holes look like a giant who is drinking water in the sea. The foundation of the stack has been shutter proved with concrete that keeps save it from the harshness of the sea. Several birds such as gulls and fulmars live here, and it is famous for a white shirt. No doubt it ranks in worldly beautiful natural arches.

North window is placed by nature in the National Park of southern Grand state, Utah. It consists of rock beautiful natural arches that. not formed at the stream or river. This arch looks like a window at the side of the north. It is also famous for many names including, North-South Window, The Spectacles, and West Spectacle Arch. This arch has a span of around 90ft and 48 ft height.

Ear of the wind is a deep hole natural arch that eroded in DeChelly sandstone. It is one of the numerous fine arches which, included in the commercial Monument Valley. Many tours that go the south of the self-guided loop drive. This arch is placed within the borders of Monument Valley Tribal Park and comprises beautiful natural arches. Whatever, a Navajo guide is necessary for any visit here. It has an almost height of 37m.

Perhaps there are many more natural arches in the United States than anywhere else around the globe and each one is amazingly beautiful. But I feel the Double Arch is the most beautiful natural arches in National Park. Double Arch was shaped by water erosion and has a spread at 148ft. this arch was used as a background for the opening scene of the movie Indiana Jones and the Last Crusade.

The most impressive natural arch in the world can be Rainbow Bridge. It is the largest natural bridge in the world and this spot, considered to be blessed for the local American Native tribes. They call this area to their home. It positions in the U.S. National Monument, but part of the land is also a property of the Navajo Nation. You can reach at the Rainbow Bridge by boat, by backpacking, or by a 3 mile round trip trail with a trailhead that is easily reachable by car.

At a height of 250 feet, Aloba Arch in the landlocked country of Chad in Central Africa is the beautiful natural arches in the world. It has also consisted of the world’s second-tallest arch. This arch appears in two stages. While the upper half portion has supported at the end of the sandstone slab, the lowers half part of the softer stone has eroded by the stream. These amazing natural arches around the world, created in rocks, and there are many more exists all over the world, like China, France, Utah, etc.

The Elephant trunk hill is the name of a natural arch that placed in China. This arch has unique features, which just look like an elephant trunk. It is not only a tourist destination but also a symbol of Guilin, which uses elephant Trunk mount and osmanthus flower as its city symbol. Hence it consists of the natural beautiful arches in the world.