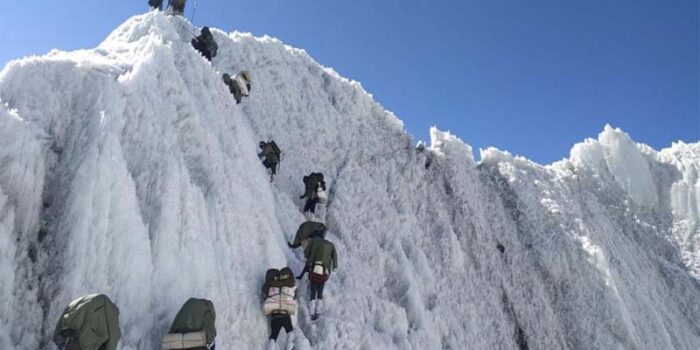 The glacier is a constant figure of dense ice that is persistently moving underneath its weight. Glaciers are formed by the accumulation of snow that exceeds in one place. These are mostly found in icy places where the temperature goes in minus. In our Earth, almost 99% of glacial ice contains inside the vast sheets of ice in the Polar Regions known as Continental glaciers. But these glaciers can be found on mountain ranges as well. No doubt glaciers are the most beautiful places on Earth, but human bodies are difficult to survive. Below is the list of top 10 beautiful glaciers in the world.

Concordia glaciers are the crowded places of Godwin Austin, Baltoro glaciers. It placed in the heart of Karakoram mountain ranges in Baltistan, Pakistan, at the above sea level around 4691 m. Initially, an English mountaineer Aleister Crowley gave to its name of Concordia in 1902. Among the beautiful glaciers in the world, it is one of them.

Glacier Bay glacier found in southern Alaska, the U.S. initially it was proclaimed a U.S National Monument in 1925. Later it had enlarged and designed as the Glacier Bay National Park. Now it is under UNESCO world heritage sites and one of the outstanding and popular tourist destinations. It has also made space in 10 beautiful glaciers in the world.

Fox and Franz Josef Glacier are like couple glaciers, found on the South Island of New Zealand. Approximately the length of Fox glaciers is 13km and Franz Josef is 12 km. these glaciers are beautiful and biggest glaciers around the world. These are one of the unique glaciers because they descend to about 900 feet from sea level, and are still frozen at this low altitude.

Lambert glacier is a foremost glacier in East Antarctica. It stretches up to 50 miles wide, over 250 miles long, and about 2,500 m deep in the world. It’s also got a Guinness world record as the largest glacier in the world. No doubt it ranks in beautiful glaciers around the world.

In the list of the Top 10 most beautiful glaciers in the World, Pasterze Glacier is at no 6. This is the 6th Most Biggest Glacier in the World and most stunning as well. This is placed in the Grossglockner, Austria. The total length of this glacier is more than 18.5-kilometer square, and the highest altitude is 3,453 meter and the lowest altitude is 2,100 meters. It consists of one of the biggest and beautiful glaciers in the world.

The Perito Moreno Glacier locates in the Los Glaciares National Park in Argentina. It is also a tourist destination in Argentina. This spectacular Glacier stretches up to 30 km long. Not only beautiful glaciers in the world but also one of the 3rd largest suppliers of freshwater.

Margerie glacier, a frequently visited famous and beautiful tourist attractions in “Glacier Bay National Park and Preserve” in Alaska. This glacier has stretched upon around 34km in length. In 1925 it declared as a National Monument and preserved in 1980. It reserved as UNESCO World Biosphere in 1986 and became a World Heritage Site in 1992. This glacier is also a famous point for tourists and comprises beautiful glaciers in the world.

This glacier is the largest spot in Iceland and covers around 8% of the country’s land area. The name Vatnajökull means ‘glacier of rivers’ and it got the name due to the multiple bays and passages of the glacial lake has. This glacier is connecting to the sea in many places and forming a network of ice and water. Frequently the structure of ice becomes shatter and floats into the sea thus that provides amazing views of the area to visitors The different sizes and shapes of the icebergs around this glacier make it one of the most amazing and beautiful glaciers in the world.

The chilly land of Antarctica is the heart of the largest glaciers and freshwater assets in the world and Canada’s Glacier is just one among them. Canada glacier, situated near the Taylor Valley, Victoria Land, and collects very little snowfall. Thus it is a type of desert ecosystem with nearly no flora and very little animal life. The melting of this glacier feeds two seasonal lakes that are Lake Fryxell and Lake Hoare. These glacial lakes remain freeze throughout the winter and appear as beautiful glaciers patterns in the ice.

This glacier exists in the eastern Karakoram and goes within the Himalayan Mountains that stretch up to the end of the line of control between India and Pakistan. It is one of the biggest and beautiful glaciers in the world. The total length of the glacier is around 700 km sq and altitude is 5400 m. And No doubt one of the amazing glaciers around the Earth as well.