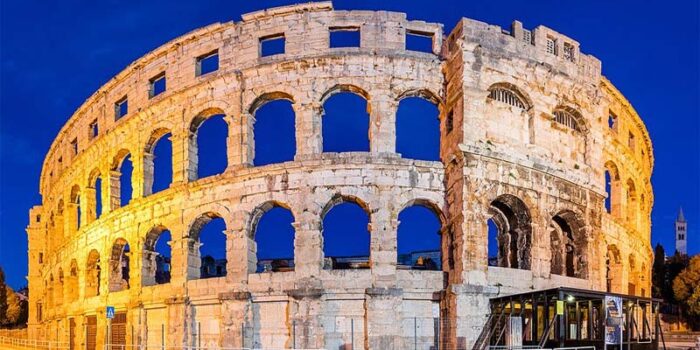 Roman’s colony “Uthina” is in Tunisia. That was a major way to go to Cartage from the south and west of the country. Its archeological part had an amphitheater that could attend around 16000 visitors. Its lower part is dug into the hill while the curves are above the floor. The seats of the arena are not related to ancient Roman amphitheaters, and that rebuilt recently.

No doubt, the Colosseum is the most popular and consisted of beautiful ancient Roman amphitheaters and UNESCO sites. It is also the best place for tourists in Rome. Concrete and stones used in its structure. This place considers as a great work of Roman architects. This large amphitheater could assemble 50,000-80,000 spectators without trouble. The Colosseum manufactured between the centuries 70-80 A.D.

It built at the last of the 1st century that accommodated approximately 24,000 spectators. The ground of Nimes was one of the largest Roman ancient beautiful amphitheaters in the world. It modernized in the year 1863 and now serving as a bull ring and other festivals. At present, it has a capacity for 16,000 viewers.

It is one of the 3rd largest beautiful ancient amphitheaters in a world that survive from the Roman period. Its outer part that has white and pink limestone has completely destructed in the result of the major earthquake in 1117. But its inner part is well preserved and still using currently for opera performances. It could host round 30,000 spectators. Throughout it used for centuries to host multiple demonstrations, athletic competitions, and tournaments in the Middle Ages.

El Djem was Tunisia’s third largest beautiful ancient Roman amphitheaters in the world, after the destruction of Rome’s Colosseum and Capua. It made in the early 3rd century that hosted 35,000 spectators in a day. Its main structure remained in good condition until the 17th century. It used for making movie’s some scenes of Oscar award film Gladiator. Now it is famous for tourists in Tunisia.

Pula Arena is the 6th biggest beautiful ancient Roman amphitheaters and well-conserved monuments of Croatia. This built-in the 1st century that accommodated over 26,000 spectators. Many houses used stones of this Arena Pula in the 5th century. But, fortunately, this practice stopped before the destruction of the whole structure. Now it is using for a variety of functions and festivals during summer.

The volcanic Vesuvius exploded in 79 A.D and covered the whole town “Pompeii” with ash and soil. Luckily, just here preserved two theaters and the amphitheater in the result of the eruption. Pompeii spectacular built-in 70 B.C and the most ancient beautiful Roman amphitheaters in the world. It hosted around 20,000 viewers that are equal to the whole population of Pompeii. But unfortunately in 59 A.D, a violent disturbance broke out Pompeii’s fans and senate banned any further games there for about 10 years.

Pozzuoli amphitheater consisted of the largest beautiful ancient Roman amphitheaters around the world. It could host 50,000 audiences. Under the era of Emperor Vespasian initiated its construction and probably completed under his son’s rule Titus. Its cavernous areas are very well maintained as well as the animals’ cages. Later it abandoned and some parts buried under ash as a result of an eruption of the volcanic Solfatarain.

It built-in the 2nd century and used for many purposes for over years also, for prison in the 18th century. It can accommodate 15,000 audiences and it has large space measures almost 130-120m. This beautiful amphitheater that had constructed in the Roman city of Tarraco and now calls it Tarragona in north-east Spain. Later than the closing of prison, it discarded even up to the 20th century. Bryant Foundation gave funds for recovering the theater.