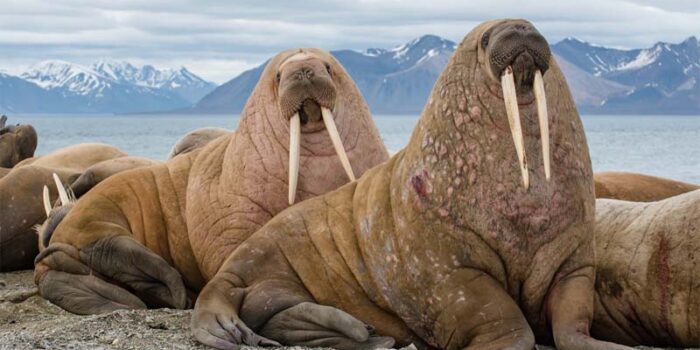 Human beings can survive in cold weather to keep them safe inside the houses, wear warm clothes and enjoying hot drinks. But there is a diverse system in animals. They cannot do these things to keep them saves from harsh cold weather. So its nature’s rule that they can adapt themselves according to the cold temperature. Here are the top 10 cold weather animals that survive in the harsh climate.

The snow leopard is a kind of a huge cat that lives in mountain ranges of Central and South Asia. It is one of the 10 cold weather animals and it is called “Ounce”. It has yellowish-grey thick fur that keeps them warm in a cold climate. Its long and flexible tail assists them to keep a balance in a rocky atmosphere. They have small ears that are covered with heavy fur.

Snow leopards usually survive over the rocky and mountainous region in the high altitude of 8900-19700 ft. However, in winters they move downwards in the forest at the attitude of 3900-6600 ft. They mostly prefer rocky areas and can travel 33 inches deep inside the snow without trouble. According to the 2016 estimation, the global population of snow leopards is 8745 in number. Snow leopards cannot roar as they have just the ability of Moaning. They almost live up to 18 years.

Arctic Hare is related to the class of Mammalian. Its family called “Leporidae”. It mostly finds in Greenland, Northern Canada, and the Canadian Arctic Islands. John Ross found this type of hare in 1819. It is included in the cold weather animals. Arctic Hare has short ears and limbs, a small nose, 20% fat and a bulky coat of fur that saves it from the harsh cold climate. It looks like rabbits and likes them, they also dig holes in the ground and under the snow to keep them safe from cold weather.

Arctic Hare changes its skin color according to season. In cold weather its new growing fur color is white but in summer it may be brown or grey. It mostly remains in the North of Canada so its fur color remains constant in white and helps in camouflage from natural predators. They can travel in groups of dozen but mostly found alone.

Musk Ox is one of the 10 cold weather animals in the world. It mostly lives in Arctic Canada and Greenland but can be found in Alaska and Siberia. This creature consists of Arctic hoofed mammal and its family is “Bovidae”. It has a bulky body with heavy fur that keeps it safe from cold weather. Both genders have long curved horns, a small tail, and large head. They have sharp hooves that dig snow for keeping food. Their horns are used for defense from predators. Its coat color is mix black, brown and grey.

Leopard Seal or Sea leopard is the second largest species of Antarctica and commonly found here. It is one of the 10 cold weather animals. It comprises cold-weather animals that exist on the coast of Australia, New Zealand, South America, and South Africa. Sea leopard has a particular long muscular body, a massive head with sharp jaws. It is a brutal hunter for an opponent. It has patterned fur that works as hiding in the water. Its thick layer helps it to provide shelter from severe coldness.

The Whale is an aquatic mammal of arctic and subarctic sea creatures. It is one of the cold weather animals that are known as “white whales”. Delphinapterus leucas is a scientific name of this whale and it is a carnivore. Its span of life is almost 35-50 years. Its body is round and due to the all-white color that helps it to merge in the icy habitat. It is 13- 20 log with 1.5-ton weight. Its ample amount of blubbers helps them to live in chill water. But when the sea freezes it migrates to southwards It is a normally slow swimmer but can go down to 700 meters in the sea. It usually lives in small groups recognized as pods and it is a social animal and can mimic a variety of sounds. It eats worms, crustaceans, and fish.

A polar bear is hyper carnivore’s mammal and mostly it lives in the Arctic Ocean. It is big for up to 3 meters. An adult polar bear contains weight almost 350-700kg while its female contains half of his weight. It is a carnivore and exists in the class of mammalian. Over time its white coat turns into pale color when it is kept in warm temperature. The polar bear is sometimes unpredictable when they become hungry they can attack human beings also. But there are rare cases of polar bear’s attack on a human because they have a lack of interaction with them. Its thick coat and heavy fur help to save from harsh weather. They mostly live in the seas. With the help of large paws, they can easily move on ice and snow.

Arctic Fox is known as “Polar fox” and it finds in Arctic regions of the Northern hemisphere. It is found in one of 10 cold weather animals. It can spend life in cold weather because of its thick fur that helps it warm and camouflage in harsh weather. Its life span is almost 11 years. It gets feed from small creatures like fish, lemming, birds, hares, and carrion. In winter its white fur color helps in escape between snows. But, in summers it changes color into brown or grey that helps to escape in the atmosphere.

Reindeer is a type of deer that lives in the Arctic, North America, Europe, Siberia, and sub-Arctic regions. It is also called “Caribou” in North America. It includes cold weather animals. Reindeer looks adorable and easily distinguishes by red-nosed. Reindeer almost increases to 135 cm in length. After the age of 5 years, it remains constant hereafter. Its large antlers and hollowed hooves help him to survive in a cold climate and help him dig. Its heavy and warm coat helps to live in cold weather.

Narwhale includes cold weather animals that are average size and a large tusk that use for self-defense. It also lives in the Arctic sea. It can live up to 50 years and often killed by suffocation after the formation of sea ice. Narwhals don’t have dorsal fins that assist it to conserve body heat and also helps in swimming easily in the sea. It can also preserve oxygen for a long period that also helps in survival.

Walrus consists of cold weather animals. “Odobenus rosmarus” is a scientific name of Walrus and “Tooth walking Seahorse” is a Latin name for this. It is a type of mammal and it finds in Greenland and Svalbard of Arctic Island. It has long tusks with a mustache. In youth, its color is dark brown but over time its skin color changes into rust or pinkish color. Because of his heavy skin, it can easily survive in an icy land. They eat almost all types of aquatic creatures. Killer Whales and polar bears are natural predators of Walrus and that is because of its tusks and size. Its length is almost up to 3.5 meters.