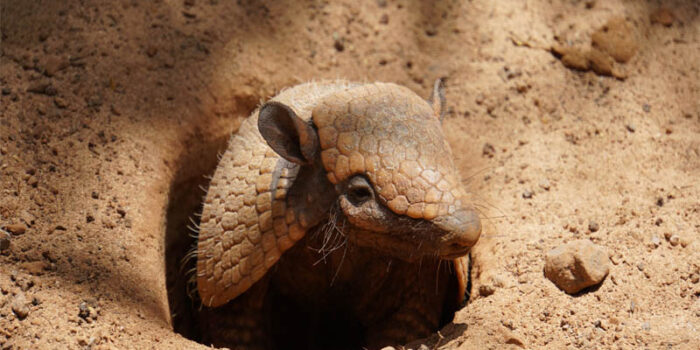 Armadillos are omnivores and belong to the Cingulata order. They are also correlated with Anteaters and Sloths which, are related to the order of ‘Pilosa’. Armadillos have around 20 species found in North and South America in various tropical rainforests to dry savannas and grasslands also. Armadillo is a Spanish name and, it means ‘little armored one’. The most common is the Nine-banded Armadillo who has stretched to Central America due to lack of natural predators. There are many interesting facts about armadillos.

Armadillos are small mammals that are around 13 – 150 centimeters long and weigh between 85 grams – 54 kilograms but, it also depends upon species. The largest one is the Giant Armadillo which, is approximately 89 centimeters in length. It is dark brown and, the smallest is the Pink Fairy Armadillo which, is 90 – 115 millimeters in length Other species are found in black, red, grey, or yellow color.

10: Armadillos are Closely Correlated with Sloths and Anteaters

Armadillos are placental mammals that also include sloths and anteaters. The unique shape of their hips, their low body temperatures, and, the interior testicles of males. Genetically they have been divided into two orders: Cingulata, which includes armadillos, and Pilosa, which comprises sloths and anteaters.

They live in burrows like most small, skittering mammals they rely on their acute sense of smell to locate prey and avoid predators but, they have relatively weak eyes. It can quickly dig the soil with its large front claws. The holes can be a huge annoyance to owners, who may have no choice but to call a proficient exterminator. Some armadillos can hold their breath best for extended periods; for instance, the nine-banded armadillo can stay underwater for as long as six minutes. It is one of the interesting facts about armadillos.

Armadillos’ diet consists of insects and other invertebrates. They like to eat the occasional reptile or amphibian also, especially in colder weather. Due to omnivores, they eat plants too, interesting facts that armadillos have observed that most of the vegetation they consume is accidental.

Armadillos are not social creatures and, they are known as solitary creatures. Mostly they spend most of their time sleeping. Usually, they sleep up to 16 hours a day in burrows. They search for food in the morning and evening. During coldness, a group of armadillos may crawl down in a burrow together to share their body heat. Sometimes, seven armadillos can share their burrow with others of the same gender.

Armadillos are sometimes considered blind, but it is not true they have just poor eyesight. For searching or escaping from predators, they rely most on their ears and noses more than their eyes. If you are standing too close to an armadillo, and you are staying here quiet and standstill. Maybe, they didn’t notice when you are were there.

05: Use in leprosy research

One of the interesting facts is that armadillos are often used in leprosy research because their body temperatures are low enough for them to contract the most virulent form of the disease. Furthermore, they also don’t have a very strong immune system. That’s why they are not an ideal model for many types of medical research. Some female armadillos are used in research for giving birth to young long after they capture. These “virgin births” are a result of the female’s capability to delay implantation of the fertilized egg during times of stress. One study showed that this delay can be 2 to 3 years. But now, studies have confirmed that armadillos can delay implantation for at least four months.

Armadillos are good swimmers. They have a strong dog paddle and can even cover a great distance underwater, walking along the bottom of streams and ponds. As you know, they can hold their breath for four to six minutes in water easily. They swim when they need to cross the larger bodies of water. Because their heavy shells make it hard for them to float, they gulp air into their intestines to make them more floating.

03: Armadillos have no enamel teeth

Armadillo teeth have no enamel. They also have very few teeth. They mostly like to eat insects that’s why they don’t need heavy chewing. So, strong teeth can be a just waste of energy to grow. Interesting facts that armadillos’ teeth are enough for their consuming requirements.

Armadillos have a very low metabolic rate that’s why they don’t produce much body heat. So, the cold areas are the best living place and, they can’t keep warm very well. Plus, they don’t have a lot of body fat, so they must quest for food daily. Despite this fact, they are steadily moving to the north.

They are very soft creatures and, there are more flexible bands between the plates that let them in movement. Interesting facts that one species of armadillos that exist in Brazil can roll itself up in a ball for protection.